So I had been playing around with AC phase control to create things like software controlled light dimmers. After I had that under my belt I built this prototype to test controlling it based on an audio signal. It demonstrates a simple audio visualizer device utilizing any lamp I plug into it.

Since this is just a quick prototype, and I was just driving one desk lamp, I took some temporary shortcuts. If and when I do anything further with this I’ll make it more robust by soldering everything up on perf board or a custom PCB, and using proper gauge wire, and clearances. There is a fuse in this circuit, built into the plug going to my wall outlet.

The flow of AC is being controlled by a Q6015L5 TRIAC which can handle a large enough current and the stress of being pulsed this way. It is driven by a MOC3052 optocoupler TRIAC driver allowing a small DC current to control AC current. The microcontroller(an Arduino in this case) gets the AC timing(specifically the moment of zero-crossing) from a H11AA1 optocoupler which can be driven from AC to provide a DC current. I have a pin on the microcontroller for zero-crossing detection pulled high with an internal pull-up resistor. While the AC is not zero-crossing, the H11AA1 is being driven which pulls that pin low. At zero-crossing the transistor in the H11AA1 is off, and the detection pin goes high again. Zero-crossing detection allows for phase cutting which is essentially a method of doing PWM with an AC voltage. In this way the microcontroller can behave as a programmable light dimmer. 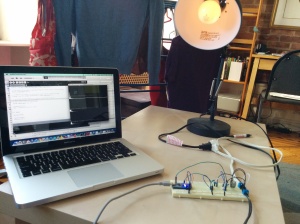 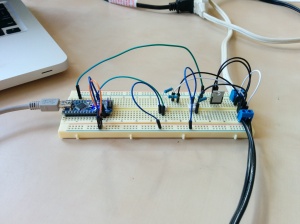 For heck I tried this same AC phase cutting on incandescent tree lights and it worked pretty well too. Here’s the video of that.