This is a simple DIY speedometer using a hall effect sensor(US5881LUA), magnet, and an Arduino.

The Arduino counts pulses from the hall effect sensor and calculates total distance as well as calculates speed from the time between pulses given the known circumference of the wheel. The calculated speed is displayed as two digits on two 7-segment LED displays. The whole setup runs off of a 9V battery.

This was an initial prototype and I’m hoping to make a second version where the display is on my helmet and connected wirelessly. 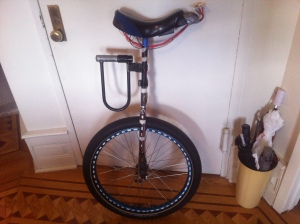