This is a test of breadboarding a PIC microcontroller to control a digitally addressable LED strip(LPD8806). I added a pot with a knob as input to control the speed of the LED pattern movement.

For this test I used a PIC18F24J10 and a 27 MHz crystal I had on hand. I used the crystal since this PIC’s internal oscillator runs at only 31 kHz. The LED strip has an SPI-like input making it relatively easy to control with bit banging.  I was able control the LED strip without the crystal, but the refresh rate was much slower than I wanted. 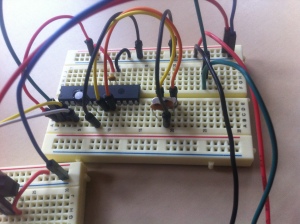 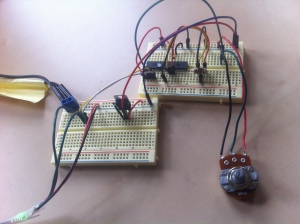 Here’s a more compact version using a dsPIC30F2011. Since it has a more flexible and faster internal oscillator I didn’t need a crystal. That package also has less pins but still more than enough for this design. Those changes and the smaller pot allow everything to easily fit on a half-size breadboard with enough room to spare for the pic programming header(ICSP).